David Bowie and his guitarist

Last week we lost a great singer, songwriter and performer! He sold 140 million records all over the world. His early music is described as art-rock. Bowie was a real musical chameleon with influences from different types of music.

Over the years,  Bowie had some great guitarists in his band.

One of my favorites is Stevie Ray Vaughan

Stevie Ray Vaughan and Double Trouble made their first appearance at the  Montreux Jazz Festival 17 juli, 1982. With the other acts all being acoustic, Stevie accelerated with their powerful Texas Blues. Ready to rock the house! The audience wasn't prepared for that and the Texans where booed!

Stevie felt heartbroken, but that same night they met Bowie. David lived in a small village near Montreux and saw their performance. This is where David asked Stevie to play on his new album. Stevie accepted the invitation. 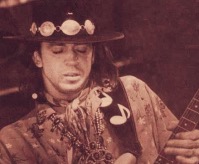 In december Stevie came in the studio and played his stunning solo on the titel song "Lets Dance". It all worked really well and David prepared for a European tour with Stevie as his guitarist.

At the very last moment, right before taking off to the airport, Stevie left the tour. His manager demanded the tour promotor to give Stevie a higher salary than the other musicians or he would take Stevie of the tour.  The latter occurred.

In 1983 they did some rehearsals in Dallas. Stevie's playing worked out amazingly good with Bowies songs. A bootleg was recorded live at Las Colina Soundstage, Dallas, Texas, USA-april 27, 1983.

Enjoy some highlights of Stevie's playing on this movie:

If you want to know more about other great guitarists of Bowie, here is al list so you can check them out: