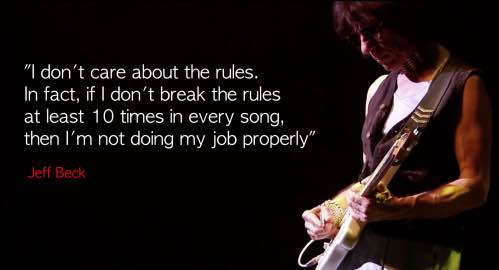 Yes, he is still alive, thank god! Born june 24, 1944 and still playing his Stratocaster in a fantastic way! His playing is creative, innovative and experimental, pulling the most stunning sounds out of his guitar.

In may 2015 he released his new live album

The album includes 14 live tracks and the 2 studio tracks "Tribal" and "My Tiled White Floor".

On the 4th of april Jeff announced that his new studio album will be available Juli 15th! Lets hope it will be as great as his last studio album Emotion and Commotion.

His career began in 1966 with the Yardbirds and still continues! His most  successful albums were Blow By Blow (1975) and Emotion and Commotion (2010). Over the years he won eight Grammy Awards! His music has its roots in Rock& Roll and Blues and is a fusion of many other genres.

Jeff is not "playing by the rules". When inspired by a musical genre or particular sound, he transforms it into guitar sounds. Unlike other guitarists, Jeff wants you to forget that it is a guitar that you're hearing. Just listen to the amazing song "Nadia" by Nitin Sawhney. Jeff is doing an incredible job by translating the woman's voice into his guitar sound.

Main ingredient for his tone is how he plays his guitar!

Jeff creates his amazing sounds mostly on his guitar, complemented by a number of effects pedals and amps. He does not use a pick. His dynamic sound comes from his vingers, the tone and volume controls and his brilliant use of the whammy bar. He also knows how to handle a bottle neck!

During the years Jeff played on different amps. Most of them are Marhalls or Fenders. In 2010 I saw him use a Marshall JTM 45. In 2007 he used this amp also when he played live at Ronnie Scott's. In the 80's he used Fender Twins. In the 90's he is seen a lot with a Marshall DSL 50. He also uses a Fender Pro Junior quite often.

Jeff loves the Fender Stratocaster. It is his main guitar. Other guitars he uses are: Fender telecaster, Gibson Les Paul, Gibson ES175, Gretsch 6128 Duo-Jet and in the 80's he also played on a Jackson Soloist "Tina".

In 2010 I saw Jeff live on stage in the Netherlands. I succeeded in taking a picture of his pedal board. The Snarling Dog Whine O Wah pedal has been on it for years now. So is the ProCo Rat and The Klon Centaur.

Most common other effects Jeff uses are: 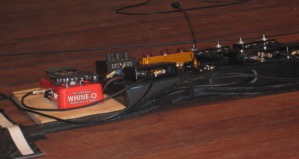